Clayton Golf Club is considered to be the longest 9 hole course in Yorkshire. If you are looking for a challenge then we have the 8th hole which is the famous “Kop”. This hole features in the book, Britain’s 100 Extraordinary Golf Holes, by Harvey and Stowger.

Our course offers a challenge for all ability levels

We welcome memberships, come and join us 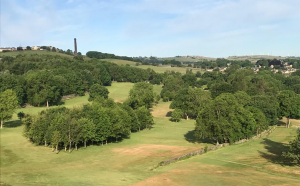 Clayton Golf Club was formed at a meeting held at the Clayton Board School on the 20th of April 1906. The club was formerly opened on the 19th May 1906.

The land on which the course would be built was originally rented from local farmers, who ensured they kept full grazing rights for their livestock. The course at this time was cut by using a horse drawn mower. The course was difficult to play, not only because of the animals but because the greens had to be fenced for protection.

In 1909, the club rented a clubhouse at 23 Lavinia Terrace, from Mr. Asa Briggs at a weekly rental of six shillings and two pence per week.

The club progressed well in the early years, but was held back during the 1914-1918 war due to lack of members and financial constraints, and loans of £25 had to be obtained from members.

A massive step forward in the clubs fortunes occurred in 1964 when the club was able to purchase part of the course from a local farmer named Pickup, at what was then an expensive £7.750. This was financed by a government loan and a loan from Mr. W Holden a former President and Captain of the club.

In 1966 the club purchased more land from the trustees of Mr. Asa Briggs.

Arguably the most important development in the clubs history occurred in 1979/80 when the club purchased six acres of land together with the old workhouse farm and bungalow. This meant the club owned the whole of the course.

By selling some land, Underhill Farm and Thornton View Bungalow, the club was able to finance the conversion of the farm into a fine modern clubhouse, and also build new greens and extend the course.

In 1996 additional land was purchased from Mr. Pickup which allowed the club to extend the course to 6237 yards compared with 3000 yards in 1906.

Today’s course is considered to be a stern but fair test of golf, made more difficult by the many tree’s and strategically placed hazards. Spion Kop is the clubs signature hole.

The club is justifiably proud of its collection of trophies which are presented annually. Pride of place on the trophy shelf are the Asa Briggs Trophy and the Priestley Shield which were presented in1906, and the Centenary Trophies presented in 2006.

Clayton were Bradford League Champions in 1969 and 1984, which is an amazing achievement for a nine hole club, who competed against clubs with county and international players.

Former winner of the English Boys Stroke Play Championship and the British Boys Matchplay Championship, he won Amateur International honours and was noted member of the professional European Tour.

Clayton Golf Club is proud of its past and its future appears to be secure.

This is an extremely brief history of the club, and much more detail is available in a book produced for our centenary in 2006:

Contact the club for cost and P&P as required.